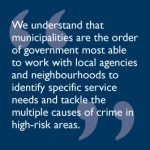 From 2006 to 2009, the CMNCP benefited from federal funding and a partnership with the University of Ottawa to become a community of practice and produce “Canadian Strategies and Practices” (2008) on what is needed for municipal crime prevention to be sustained as well as “Action briefs for municipal stakeholders” (2009) on how to do it.
From 2009 to 2015, the strong commitment of the members of the National Municipal Network (now CMNCP) and of the Institute for the Prevention of Crime at the University of Ottawa continued to build on the work done in developing knowledge and in sharing experiences and expertise to make Canadian cities and communities safer.
In 2015, the commitment of members led to federal funding for the project called Building Municipal Capacity to Harness Evidence to Prevent Crime.  This is a project of the CMNCP in partnership with crime prevention specialists at the University of Ottawa with the financial support and collaboration of the National Crime Prevention Centre of Public Safety Canada.  This project fostered the capacity of CMNCP to work as a community of practice to harness evidence to prevent crime and to engage municipalities in comprehensive community safety strategies.
The Building Municipal Capacity to Harness Evidence to Prevent Crime project ended in September 2018. The project allowed CMNCP to grow its membership, to host municipal exchanges, trainings, and workshops that helped members access evidence and develop their skills, and to sensitize a number of key stakeholders to the evidence on crime prevention. Since September 2018, the Canadian Municipal Network on Crime Prevention has continued its core activities to mobilize municipalities to foster community safety and well-being across Canada.